Our community (for those of you who came here just by chance and don’t know what the hell I’m talking about it is HEMA- Historical European martial arts community) tends to bring up the same topics with amazing regularity.

Quite recently, this topic was again brought up: “why do white, middle class men dominate our hobby and what to do (or what not to do) to open to a larger group of minorities?”

Undoubtedly one of these minorities is women and of course the same annoying old opinion appeared – “If women wanted to, they would come to us on their own and we wouldn’t need to do anything to make our activity look more appealing to them”. As a female fencer and as an instructor I beg to differ with such opinions.

With more than half of my life spent first in professional sports and now in less official and recognized, but still quite institutionalized physical activity, like historical martial arts, I’ve seen a significant number of things that could and should be changed or looked at differently. This could bring more female students into it. Sadly, some of those things are so engraved into our culture and upbringing that it will take a lot of time before we will get rid of it for good, if ever.

During the last few years I have had the privilege to teach people from very different backgrounds, with different levels of skill, and very often people who have never held a sword before, and probably would never do it of their own free will were it not for taking part in a LARPing (Live Action Roleplaying) event. That alone gave me a perspective that I haven’t had before, and most notably, has shown me something very worrying. I was able to compare the performance of women and men, absolute beginners with no martial arts background. Many women seem to be just less fit and less sure of themselves in sports. So let me talk a bit more about the whole issue. 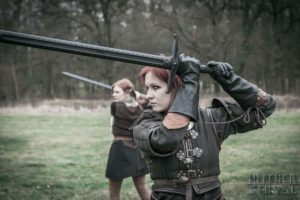 Women from a very young age are told that physical activity is generally not very ‘ladylike’. Of course, that is a huge generalization and people are very different but several studies look into that, which have found that women are, on average, less physically active than men [Edwards and Sackett, 2016; Telford et al., 2016]. Why? Excellent question, because there is no reason why women should be less attracted to exercise. Apart from one – our society sees physical activity as more of a ‘boys thing’. With martial arts the issue reaches new depths – since it is more of a contact sport that requires a lot of physical contact with the intent of attacking another person. We discourage girls from partaking in sports of such nature, putting in their heads that it is not something girls should do. With time it pays off, women who have never exercised will be less coordinated than their male counterparts who do some light exercises or even do nothing in adulthood, but had a lot more physical activity in their early years. Women who start martial arts without any preparation or experience in sports tend to be less sure of their moves and to have problems with applying drills and exercises. This phenomenon has nothing to do with being female. It has a lot more to do with our approach to gender as a society. Who hasn’t met with the (not very wise) notion that boys are more naughty and aggressive and sometimes fight with each other while if girls behave similarly, it is just not accepted. I heard from many women that they don’t like any idea of hitting people. There is nothing wrong with that, of course. But I never heard anything like that from a guy, although I’m sure many of them think the same. But again, this concept has been put into our heads; fighting is ok for boys but girls should not go around hitting people.

Some of you would say that this is not only gender stereotyping and culture: “clearly, women are less aggressive than men!” There are just two problems with that. Being more aggressive shouldn’t be a reason to train martial arts or to be drawn to weapons. Almost all sports premise on defeating your opponent or the other team. Almost all of them require you to be bold, confident and ready to overcome your limits. Do you need to be aggressive? It depends how we define aggression, and interestingly men and women tend to view aggression differently.

Men see aggression as an exercise of control over other people – which sounds like something that would help in martial arts, while women experience aggression through excessive stress and loss of self-control, which does not sound so helpful in comparison [Campbell & Muncer, 1987]. Girls receive much more negative feedback during their developmental years about physical aggression and there is no cultural acceptance of aggression in girls. And I guess we are coming back to the cultural stereotyping part… 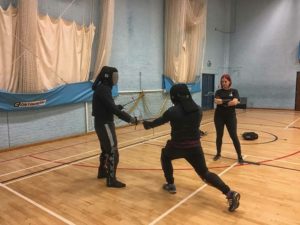 But again, another ‘argument’ repeatedly appears in such discussions. Hormones! It’s all the fault of testosterone. Biology! Science! You don’t discuss that, right?

Ok, so what about testosterone? Yes, men have higher levels of it so that must be why many women are not as happy to fight. Well, again… there are some problems with that. First of all there are many female martial artists (although way fewer than men) who are perfectly ok with fighting others and do not have higher levels of testosterone than other females.  That might mean that testosterone is not a sole indicator for liking or not liking to fight.

But there is an even more basic problem when it comes to testosterone. We still don’t have a full grasp on how testosterone levels influence the likelihood of being more or less drawn to martial arts. Research is inconclusive, and you can find studies that contradict each other [Archer, 1991; Batrinos, 2012; Inoue et al., 2017; Kasper et al., 2014; Mims, 2007-which is more a magazine article and not research but you still might find it interesting!].

In fact, when it comes to fighting, we should be looking at the whole array of hormones and not only testosterone, which both males and females have, although in different amounts. Also, significantly higher or lower levels of testosterone may point to an underlying medical condition that requires professional attention. It can be fixed with medications but I assure you it’s not that all men who train martial arts have such problems.

Obviously there are certain differences in our anatomy which just make men more effective in the short run – on average they have greater muscle mass, and because of that they are stronger and faster than average females [Miller et al., 1993]. But starting with an obvious – average does not mean everyone. Differences between one man and the other can be as big as between the average man and woman. Techniques used in martial arts are not only designed to fight people of the same size as you. There are many that teach you how to fight people heavier and bigger than you. In martial arts, overconfidence is a very easy trap to fall into. Some people seeing smaller and weaker opponent are sure that they have already won. They couldn’t be more wrong. During my fighter career I’ve seen quite a lot, when a petite person won over a tall, big one just by sole skill and not excessive force. Women tend to be much better technical fighters cause they cannot rely on their strength, like some fencers or martial artists, they need to find other ways of landing a hit and think more on strategy.

So on average men are stronger and faster, that is true, but women have better endurance [Fulco et al., 1999; Hicks et al., 2001; Lanning, et al., 2017]. A higher percentage of body fat in women means that they can fuel their muscles for longer [Knetchle et al., 2004]. Differences in times in endurance sports between men and women starts to be smaller and smaller the longer the event lasted. Women seem to deal with pain better than men [Fillingim et al., 2009]. While men have better depth perception, distance vision and better sight than women during the day [Li, 2014]. But women are better at night vision, have better visual memory and are better at sensing moods of other people, which in turn can help in sensing weaknesses in their opponent. Women are also much better in retaining balance and can generate quite a lot of power coming from the hips, which is not that easy for men and caused by the differences in center of gravity for both sexes. So, of course, there are differences between men and women in martial arts but all of us can use those traits to our advantage. Although the strategies we work out might be different.

Beginners in HEMA (both men and women) most of the time don’t know that it is a sport in which you need to use your whole body and many times you need to use many different groups of muscles at once to deliver a hit, parry or dodge. For men, having more muscle mass and higher upper body strength, it might be easier in the beginning even if they don’t know that they should use other muscles too. They can deliver a strong and quick hit even using only muscles of their arms. For women it is much more complicated. Women need to use many more muscle groups and especially their hips during a movement to deliver hit of considerable strength and quickness. In the case of female martial artists most of their strength will always be derived from hip rotations and not from the upper body. Fencing instructors are often more male student oriented and don’t see that difference most of the time. They teach both male and female students body mechanics in the same way, which puts female students in a worse position than male ones.  Female students should be taught from the first day to use their whole body and not only upper body. In fact all students should be taught that in the first place but while men will be ok with that in the beginning, women won’t because their movement will be significantly weaker and slower.

The last thing is something I cannot stress enough – if you want more minorities and variability at your trainings and in your club you cannot joke around and bully others. Even if you think it is completely innocent, funny and the person you are doing that to is your friend since nursery. New people won’t know that. For many of us going to a completely new environment, with unknown people is a challenge in itself, especially if we are going there on our own. It is coming into a completely new close-knit group as a stranger, an outsider. It is a sad truth that most women face unwanted attention and verbal and physical attacks in their lives. It is not something that should be joked about. For many of them coming to a club, into an activity dominated by men, to a group they don’t know is an act of courage, and even silly jokes might drive them away. If you want to have a larger diversity of people in your club, please try to reach out to them, even coming an extra mile and spending a bit more time with them and trying to help, is better than being cocky.

And last but not least, we don’t want to be treated as a club mascot, something special. Even if you have one woman in your club, or one just visits your club, don’t treat her as something exceptional. We want to feel equal as fencers, martial artists, and scholars. Not special snowflakes.

2 Comments on “Why Women Keep Away From Martial Arts”