Hello, my name is Mariana, the internet knows me as “Perica” and I suck at fencing.

I have a very nice club, I’ve been able to take seminars with many great instructors, I’ve been able to fence them and I’ve been able to travel, know and train with many people, etc. My students have done well… my first HEMA student who now has traveled as much or more than me did twice better than me in the tournament he took right after I spend 3 months being her main instructor. In fact, let me put this straight: I didn’t move out of the pool… he always does… and he does it with good technique, skills and beautiful moves, he stills better than me, he gets better each time, and I still suck.

Yet I’ve been told I have the skills, I’ve been told I have potential and in many cases I’ve been told I have a talent for it and I just need to keep on it and become something like a very amazing fencer because I have it natural…. It hasn’t happen yet. My first thought is that everyone is lying to me, but if by some chance they are not then many things have to do with my faultier: training, dedication, provably even what I eat and my sleeping habits. But today I realized one thing that will never allow me to be a good fencer until it’s changed: Gear.

One day Mike Edelson told me after a fight that got me very frustrated: Don’t expect to be any good at a fight as long as you have that stupid fencing mask in your head. It makes it twice as big and you can’t even lift your arms and it makes you a big heavy target to hit.

But I was used to it, I was used to my bad gear but I decide to listen and I changed my mask because I wanted to become better… but for then the only gloves that fit me (kids size lacrosse gloves) were no longer good for HEMA and cost me a broken finger and 30,000 Pesos (1818 USD) of surgery and a titanium insert because the cut was just too perfect for it to hear naturally. All I had left was my gambeson, custom made, perfect fit, based on a historical one with modification and with the issue it exposed my armpits so I had to change it because regulations of tournaments, and this is what happened: 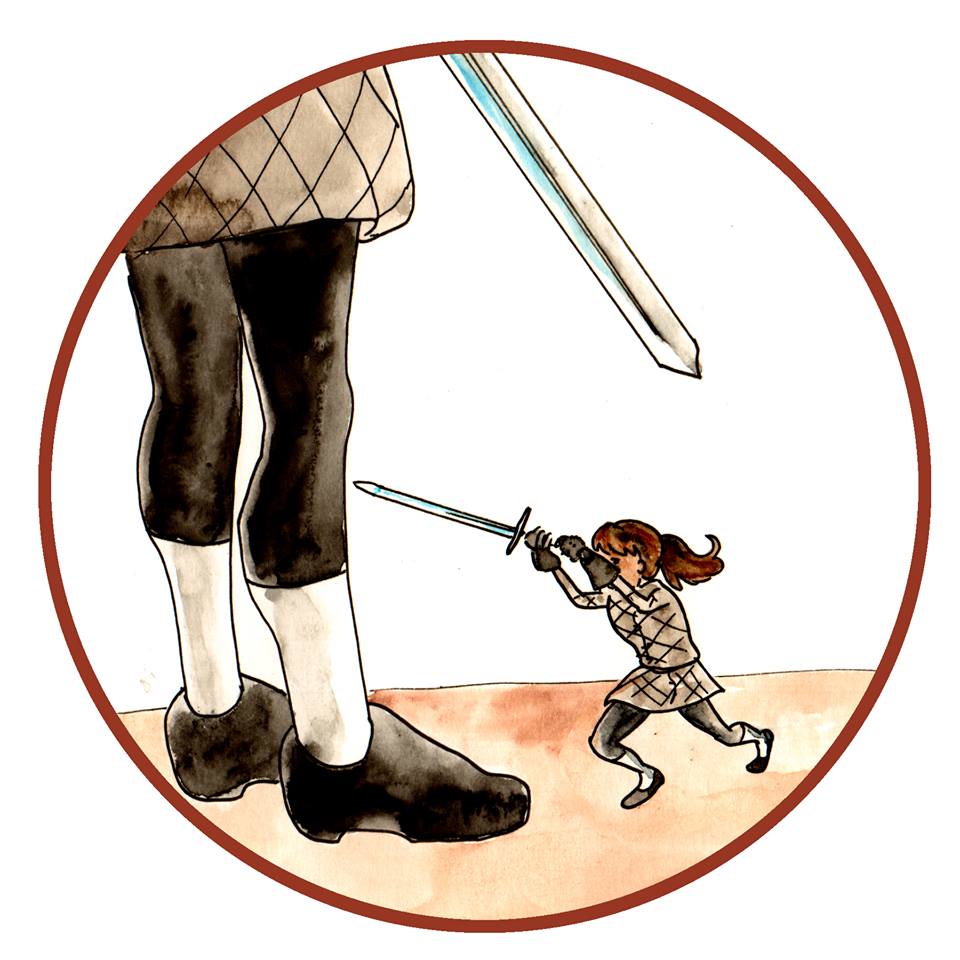 Mask, special XS size, not sold to adults but to teenagers it fit, XS back of the head protection? Not so much: a bit bigger makes the head a bigger target, also makes the head swing a bit because it moves more than it should even if it stays where it has to, no smaller size available Gloves: HEMA specific and the smallest size, modified because I wasn’t able to close my hands around the sword, can’t do any guard as Ochs or such because they gloves get on the way and make my hands dumb. I just can barely grab the sword. No edge control and don’t work with a short handle sword like mine because while the sword is good for my small size and improves my HEMA, the gloves don’t fit because too big. Smoothness is nearly impossible

Custom made Jacket: that wasn’t really a fit, because apparently retailers are so unfamiliar to such small sizes they asked for the measures 3 times… even when a lot smaller than the rest, smaller it’s still bigger, and while I hope it will change once it completely breaks in.. The funny fit mess in the moves.

Chest protector: Made it myself…. No commercial brand would even fit… and that made them more dangerous than protection; no complain about that one, luckIly.

What’s my point? It’s been my second training with AEEA in Spain, with my new gear. The exercises we do with no gear at my club, they do it with the gear here… I used the custom made jacket, the new super small gloves and kept away the extra head protection… and all the moves I do smoothly and even laughing at a regular training, suck. And I can fix my body and I can change my foot work and all I do, with those 3 basic things on me I will always suck. I was twisting myself on such insane forms to make it work it was no longer HEMA. For the first time I start realizing how gear changes all my body and how little the material breaking in would help. Yes I might have been stupid for not realizing this before but my old bad gear was my one and only gear and I was too used to it to realize it.

HEMA gear must be like good jeans… there’s no way to be comfortable in the street if you have to pull them up every 3 minutes… well I’m pulling my pants up when I have a sword pointing at my face… This issue is not only mine, yes I’m an absurd funny shaped human with exceptional sizes, but what applies to me in 3 pieces of gear applies to others by parts and with more people joining, more ladies and guys who fit my conditions are out there for the fight.

The situation is simple: There’s no gear for the XS, and this is limiting people like me, and many others on being good or at least being better, or if not, of having the movement needs in order to do what they can do. Maybe there are not enough XS customers for retailers to realize or care, of be able to afford it, because XS people just buy the smallest we can find and we can’t do more, we are stuck with it because we are not allowed to fight with anything else… although again.. There’s nothing else….

I’ve tried and plaNned on making lists and lists of the needs of girls on breast protection and how it limits movement in a fight and how HEMA breast protection should be created, but the truth is that this is a generalized issue, the HEMA Gear industry is taking shape, and we the small ones, are not on the list of things to be add on the chart (yet). There’s a current deficiency on access to gear, 5 years ago, it was because it didn’t existed, now: it’s because the gear who enters to the norm and is now mandatory for the most, is kicking out a percentage of the competitive list by not providing the tools needed in the needed way, so the fighters could be in the fight and not worried trying the sword not to fall off because you can barely grab it. And even worst!! Lack of competitive gear in a smaller size will, in a good measure, limit the new movement of teen ager HEMA fencers who want to show their own skills. Whom, because of age… are like an XS.

The right gear won’t get me a medal if I’m not a good fencer, that’s true, but at least I won’t have the limitations to make this an excuse, and I will suck because I do, not because I can’t keep my gloves on, or maybe I’ll be a thousand miles closer to know the amazing fencer people see on me and I don’t… maybe a small someone out there will be able to show what an excellent fencer we’ve miss due to simple bad gear.

HEMA Gear makers this is a call for you: SMALL PEOPLE NEED YOU!