Hot on the heels of her thrilling rapier final victory against her husband Lee Smith at EMA Gathering, we interview Nicole Smith of Blood and Iron Martial Arts, Canada. 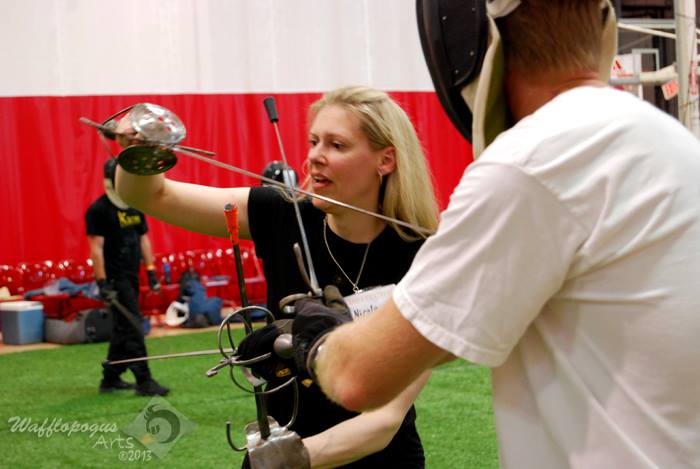 Tell me a little bit about your current involvement in WMA (e.g. where do you train, what styles do you practice, who do you train with, etc)

I train at the school I own and run with my husband, Lee Smith; Blood and Iron Martial Arts. My first weapons were the rapier and dagger they will always be a favorite, but right now I am more focused on long sword. I also work with sword and buckler, dussack, messer and dagger. I practice with my husband and our competition team comprised of 10 of our top students. We push each other a lot harder during our fight team training. Having a national level conditioning coach on the team really helps as well. We primarily train from the works Meyer, Ringeck, Marozzo and Capo Ferro. We take what we have studied from the treatises and manuals and put them together with our modern understanding of body mechanics and physiology. It seems to be working.

What do you love about WMA? Why do you do it?

I love the feeling of confidence and strength that comes from practicing a martial art. I love the feeling of accomplishment after pulling off that one amazing shot against an accomplished advisory. But I really love the way you relate to someone after you have fought with them. The conversation of the blades between two fencers is like no other. You really get to know someone on a different level when you fence them. It is hard to explain unless you have experienced it, but every martial artist that spars will know what I mean. I do it because I love it. So much so, that it has become my life’s work.

What made you take up WMA (e.g. how did you discover it, what was your first session like, what made you decide to come along in the first place)?

I began practicing WMA for fitness and because I wanted to do something different and interesting. I am not a gym person. I don’t like working out on machines. I find I need a group to train with to motivate me. Sword fighting appealed because although it is an individual sport you still have the camaraderie of your sparring partners to keep you going. I don’t actually remember my first session but I do remember one asshole in our group that would just peg you in the head and never offer any tips or advise on how you might improve. This guy did not try to engage anyone in conversation until you had been around for at least three months, he would just beat you up and leave, off to the next person. I hated this guy. Surprisingly, I wound up married to him.

What are the biggest challenges you’ve faced?

So far I have faced two real challenges. The first one is one we all face as women in HEMA. Being taken seriously. For me being a woman in HEMA in the beginning was like being relegated to “tag along” status. She is just doing it because her husband/ boyfriend is doing it was the usual assumption at tournament events. I did occasionally find this particular challenge a bit of an advantage. Men would underestimate me and count me out completely. It was the biggest surprise when they discovered their mistake. “You are a lot stronger than you look” was something I got used to hearing. The second challenge was more personal. In June of last year I completely severed my achilles tendon. I had it surgically reattached about a week later and spent an entire year on the sidelines. I am still undergoing physiotherapy but about three weeks ago I was finally given the go ahead to spar. I was both elated and disappointed. I was happy that I could finally fight but so dismayed at how far I had to go before I would be back to my former self. My skills are steadily improving. Just last weekend I was teaching at the So Cal event in California. I entered the rapier tournament just to see how I would do and I won third. I have a long way to go but it is nice to know I am not completely down for the count. 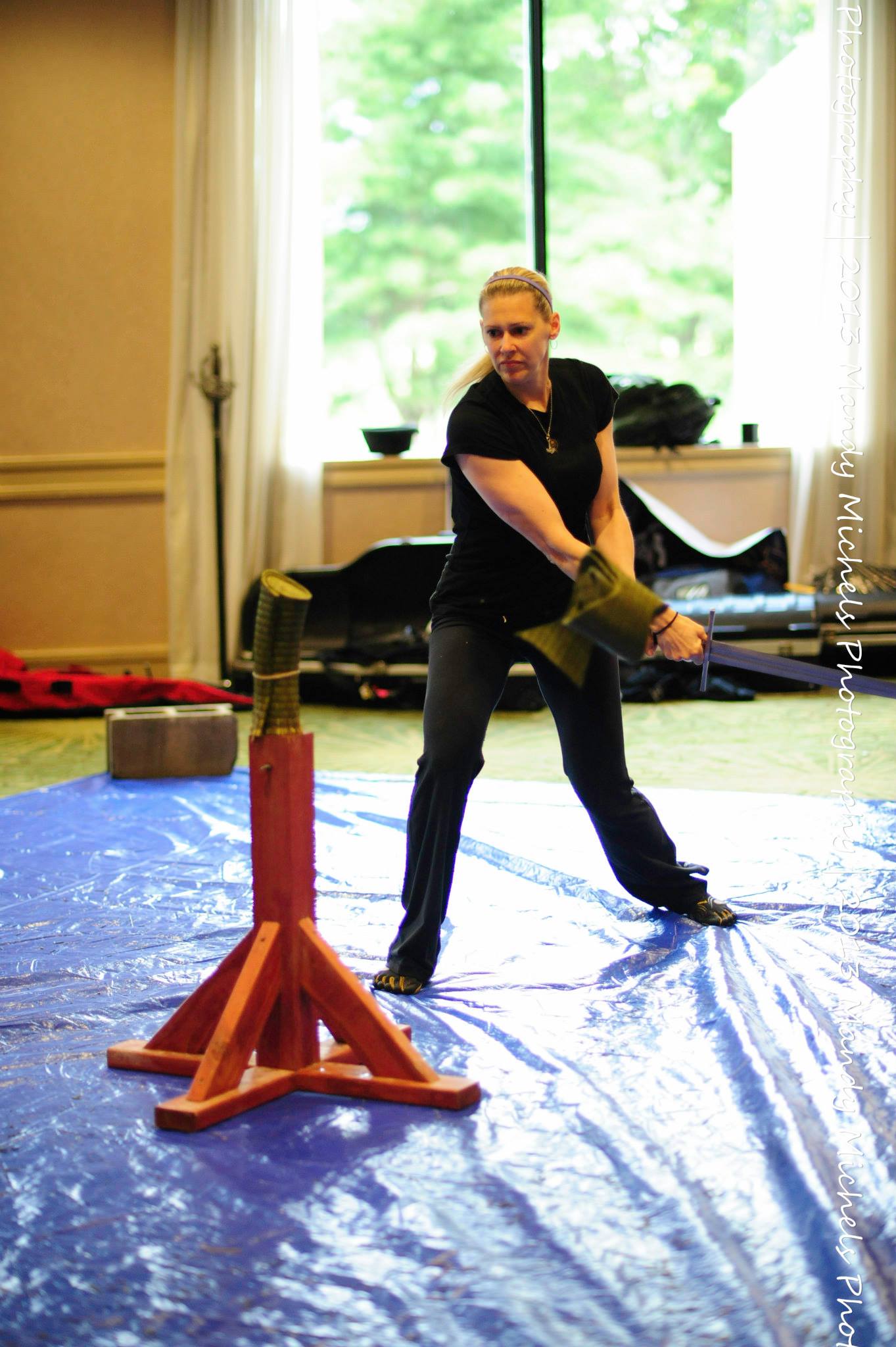 What achievements are you most proud of, and what are your favorite memories?

I am very proud of what we have achieved with Blood and Iron. Starting in a church hall 4 years ago with four students, practicing two days a week and building it up to a 3000 sq ft training hall running classes 7 days a week with over 60 students is quite an achievement. We have trained and coached our students into placing and now winning tournaments in North America. I think that is something to be proud of. I have so many fond memories. I remember one of my first WMA events. I took one of the last bowie knife classes taught by Col. Dwight McLemore before he retired and I actually got to spar with him (he kicked my ass). I remember another taking another class and being so clumsy I accidentally stabbed Steve Huff in the eye during a drill he was instructing me on. He still reminds me about it to this day. I remember after blowing out my achilles tendon, helping teach a long sword class in Las Vegas from my wheelchair because I could not help myself when I saw people performing drills incorrectly. But my favorite memories are those when the people I was taking lessons from, began speaking to me as though I were one of them.

What are your WMA goals for the future?

I have a list of tournaments I would like to win…Longpoint, International Lowlands HEMA Gathering, Swordfish…..but mostly I would like to build Blood and Iron into the Best WMA school in the world. I know there are a few other schools with the same goal….we will see who gets there first.

Tell me more about your life (if any!) outside WMA.

Lee and I were laughing about this the other day. WMA and HEMA has pretty much become our life. Running your own business is a full time job. Lee is in charge of training curriculum and most classes and I pretty much run everything else. Our only day to ourselves is Sunday and it is not unusual for us to use it for cutting practice. We do try to make time for things not sword fighting related. Lee and I both shoot, we are members at our local range. We recently tried our hand at hunting…….we discovered it is just as much fun off-roading all weekend searching for bear as it is to actually find one…..right?

What response do you get from friends/family outside the WMA community when you tell them what you do?

My family has always though I was a little “different”. Even growing up I was the child looking for adventure. I began SCUBA diving as soon as I could pay for my own lessons, from there it was dragon boat racing, and out rigging. I was always looking for the unusual so it came as no surprise to them that I would take up sword fighting. My friends were another matter. Fencing…..like the Olympic stuff right? NO! Certainly not, I would explain, real sword fighting with actual swords not electrified car antennas. I was still working as a dental assistant when I began sword fighting and I remember another assistant noticing the frequent bruises on my arms and approaching me with the number of a women’s shelter. Because, you know, there are places you can go to talk about this. She thought I was crazy when I explained what I did for fun.

What advice would you give to other women thinking about, starting out in, or practicing WMA?

For those thinking about WMA…..get off your butt and start doing! For those starting out find a reputable school or teacher if you can. It will make such a difference in your development as a martial artist. I am always happy to direct people to groups and clubs in their area if I am asked and know of one. Secondly don’t be afraid to spar. Any groups or schools worth their salt will be encouraging and supportive of new fighters. We all have to start somewhere. Women sometimes have a hard time with this. Strangely it is not the fear of being hit, it is the fear of hurting someone. We are taught to be nurturers not fighters and I have encountered many women that are very uncomfortable actually hitting someone. It gets easier. But, unless you can apply techniques under duress you don’t really know them. For those that are practicing….Train hard and regularly. Until you build your reputation, you will always be underestimated as a woman when sparring. It is one of the realities of fencing with men. You will have to win their respect the same as any fighter, sometimes more so. Give them a good, hard fight and they will respect you. Secondly, spread the word. Tell everyone about what you are doing. Encourage your friends to come out and try a class or a practice. Women are very under-represented in HEMA and we are the only way that will change. Get out there, fight and promote yourself as an example of how beautiful strong can be. Show them, muscles are sexy! 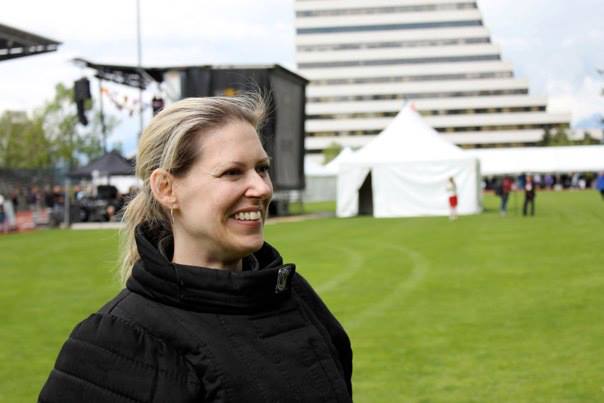